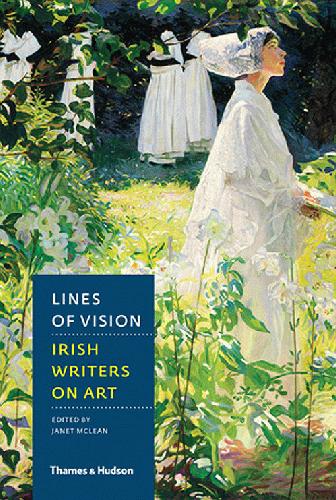 “The aim of art is to represent not the outward appearance of things, but their inward significance.” – Aristotle –

Of the great artists of the world, the community of the uninitiated would immediately bring to mind names of artists or works of art from countries such as France, Italy, Spain, and the Netherlands. Some slightly more initiated may recall the names of artists from North or South America and England. The one country that surprises in its abundance of truly great artists, lush with talent, skill, and influence, is Ireland.

People generally remember Ireland for her wealth of literary geniuses – Joyce, McCourt, Banville, Behan, Wilde, Enright, Swift et al – as well as her plethora of musical prodigies, of which new ones spring forth regularly. Upon further investigation, Ireland is the birthplace of tremendous artists of the painting, sculpting, even stained-glass-making variety.

Ireland is a country, like others, with a storied history; one of tremendous hardship and struggle to survive. The difference with Ireland is that, as an island, cut off from the masses, she has had to look inward for her strength, she has had to use her wits and her wit to survive and thrive under inhospitable conditions. This constant inward gaze acts as an incubator for creative thought as a means of finding and making sense of the truth, which ultimately needs to express itself in some form.

In 2014, in celebration of the museum’s 150th anniversary, the National Gallery of Ireland invited fifty-six Irish writers to spend time in the gallery, choose a work of art for inspiration, and write. The book Lines of Vision: Irish Writers on Art, documents the results. Simultaneously to the release of the book, the NGI held an exhibition along with a full program of events centered on the theme of art as inspiration, a theme chosen because of the tremendous link that the museum has been in the lives of Irish writers since its opening in 1864.

This book and exhibition exemplify the core message of Art Life Connection – that art in all its forms reaches into our souls, touches us in some meaningful way, and leaves behind a better person, inspiring that person to reflect and create his or her own art. One person’s tangible, creative expression of his or her own inner truth/pain/struggle/joy has meaning to every other person who sees the artwork. The beauty of it all is that none of us has to be an expert or professional in order to create art, to express our inner truths/pains/struggles/joys. We simply have to look for the connections as we go about our daily lives, taking time to reflect, then apply what we learn in whatever form it takes.

Your referral is the highest compliment. Thank you for sharing.

Please leave a reply. I welcome your feedback. Technical issues or questions should be e-mailed to me at ArtLifeConnection@gmail.com. Thank you for visiting.. Cancel reply